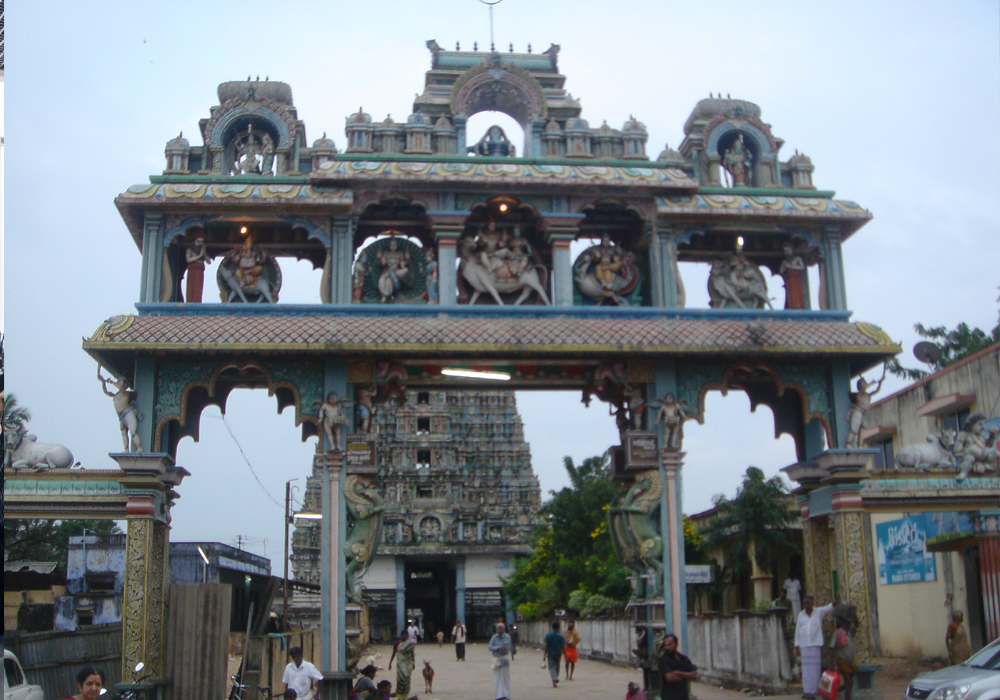 The Sage Mirukandu and his wife used to worship the Lord for a son. The Lord, pleased by their worship appeared in front of them and asked them whether they want a son, who is full of vices and lives for a thousand years, or a son, who is a master in everything and lived only for 16 years. The Mirukandu couple asked for the blessing of having a son, who lived for only 16 years.

Born by the grace of the Lord to the Mirukandu couple, Markandeya became a great devotee of Lord Shiva. When he turned 16, his parents told Markandeya that his life expectancy was 16 years, as the Lord had said. Markandeya visited every Shiva shrine saying that only Lord Shiva could save his life. Visiting the Shrine of Lord Shiva, Markandeya reached the place called Thirukkadavur. The day of his end was near when he arrived at the site of Thirukkadavur.

Upon nearing the last day of his life, Lord Yama threw his baton at Markandeya in order to complete his mission. The frightened Markandeya ran towards the Lord Shiva Statue he was worshipping at the temple and hugged him tightly. Lord Yama also threw his baton at Markandeya along with the statue of Lord Shiva. Lord Shiva emerged from the statue Linga with a trident to save his devotee and killed Lord Yama using his trident. As the Lord Almighty, Shiva killed the Lord of Death, Yama, he became the Kalasamhara. Post this the Goddess Bhudevi, Lord Brahma and Lord Vishnu requested to bring back Lord Yama, the Lord Shiva gave Yama his life back and brought him back alive. This heroic deed is one of the eight heroic deeds of Lord Shiva.

Brahma worshiped Lord Shiva with the desire to receive enlightenment. Lord Shiva gave him a Vilva Seed and asked him to plant it in all Shiva Shrines and asked Brahma to worship him in the place, where the seed germinates. Brahma also planted the seed in many places and saw it germinate in Thirukadaiyur. Thus the place got the name Vilvavanam.

The Gods did not want to share the elixir of life (Amutham in Tamil) they got from the Ocean-of-milk (Paarkadal in Tamil) with the monsters and demons, took it in a pot, and during their travel they wanted to have a bath. They placed the pot at this place and took a bath. When they came back, they couldn’t take the pot from this place as it is rooted in the Earth. Hence, this place is called Thirukkadavur and as the pot looks in the shape of a Linga and it contains the elixir of life, the Lord here is called Amirthakadeswarar.

Although there were royal towers on the east and west sides of the temple, the seven-tiered tower on the west of the temple is the main entrance. The Lord Amirthakadeswarar of this temple faces west as a Self-made Linga (Suyambu in Tamil). Around the sanctum are the shrines of the Lord Murugan, the Goddess Lakshmi and the Somaskandar, the Lord Natarajar, the Vilvaneswarar, the God Byravar, the Panchabootha Linga, the Sun, the Sage Agathiyar, the Sapta Virgins and 63 Shiva Devotees. There is no Navagraha Sanctum in this temple.

In the hall in front of the sanctum of the main Lord, we can see the copper statue of Lord Kala Samhara and Lord Yama under his feet. Lord Kala Samhara is seen standing on his right leg and kicking Lord Yama with his left leg. Markandeya is seen standing nearby with folded arms. As Lord Yama threw his baton at Markandeya along with Lord Shiva, the Linga here is seen with a cut on the top and a scar over the body. There is also a sanctum for the Lord Yama here.

The temple priests had already told the king all the misconceptions about Abirami Pattar. Hence, the angry king claims that Pattar will be punished if he does not see the full moon that night. Singing 100 songs of Abirami Anthathi on the Goddess Abirami, the full moon appeared on the new moon. During the 79th song, the Goddess Abirami took off an earring and threw it into the sky, making it look like a full moon on a new moon night.

After visiting Thirukadaiyur Amirthakadeswarar Temple and the Kadavur Mayanam Brahmapureeswarar Temple, one can visit the following other temples nearby:

Thillaiyadi: About 4 km east of Thirukadaiyur is the Thillaiyadi Temple. The Shiva temple here is large and it also has a large tower. Lord Vishnu worships Lord Shiva here, who is in the form of self–manifested Linga.

Thiruvidaikali: About 3 km west of Thillaiyadi is the site of Lord Murugan on whom the song Thiruvidaikali Thiruvisaippa was sung. The main God of this temple is Thirukameswarar. However, the main deity is Lord Subramanian, who was recited by Arunagirinathar in this temple. Thiruvidaikali is the place where Lord Murugan performed Surasamharam on the day of Kanda Sashti.

Devanur: The Arulmigu Visalatchi alongside Viswanatha Swamy Temple in Devanur near Thillaiyadi is also a must-visit temple. The shrine also holds a sanctum dedicated to the Lord Guru, the God of Knowledge. The Lord Guru here is worshipped by Lord Indra.

Tharangambadi: About 8 km southeast of Thirukadaiyur is the site Tharangambadi. Today’s Tharangambadi is the Thevara songs spot called “Alappur” long ago in kinds of literature. Masilanathar is the main deity of this temple, which is in a state of disrepair due to the sea waves.

What information do we collect? We gather data from you when you register on our site, submit a request, buy any services, react to an overview, or round out a structure. At the point when requesting any assistance or enrolling on our site, as suitable, you might be approached to enter your: name, email address, or telephone number. You may, nonetheless, visit our site anonymously. learn more